Norwegian Fjord Stallion ​Standing at Stud
To view more images click the images below.
A2Z Thor is a 1987 Dutch bred Norwegian Fjord Stallion. His Dam was imported from Holland in foal to the important Scandinavian
Stallion Bjorgard. Bjorgard was by another champion stallion Astrix. Thor was born here in Wyoming and has spent his entire life with us. He and his foals have made us true believers of the Fjord horse breed. Anyone looking for the 'Family' horse is on the right track with the Fjords. They average 14 hands in height and are uniformly dun colored with a dark dorsal stripe running from the forelock, through the mane, center of the back, to the tip of the tail. The mane is trimmed to stand erect, emphasizing the graceful curve of the neck and the dramatic stripe. Many have zebra stripes running down the legs.

Thor has been used to pack elk, driven many carriages to and from weddings, worked calves at ranch brandings, carried a flag in the 4th of July parades in Cody, Wy. and willingly performed any task asked of him. He passes down his even temperament and good conformation. His foals have won at the Norwegian Fjord show in Libby, Montana and are being ridden in a drill team which performs at shows and rodeos including Cheyenne Frontier Days. Thor's offspring can be found in states from Wisconsin to Washington and south to Arkansas. We cannot say enough about this superior little horse.
Stud Fee: $600.00
To View Thor's
​Extended ​Pedigree
​Click Here 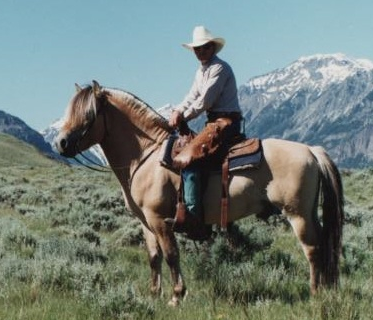